A New York-based musician, Alex Genadinik, has released a song called The Girl With The Pearl Earring Song.

The song by Alex Genadinik picks up and uses those elements of the original painting by featuring lyrics like:

“You’re silent, but your eyes are speaking.

I never learned what you were revealing.

But all these years, something haunted me.

Why did you look so longingly?”

The song also plays on the fact that the girl is obviously beautiful and easy to fall in love with. In fact, every passer by is enamored by her charm. The song starts with exactly that:

I passed a painting as if dreaming.

It was The Girl With The Pearl Earring.

As though she turned to look at me alone…

There is also a verse later in the song echoing the idea that everyone falls in love with her:

Will she have her Cinderella transformation?

While my true-love at first sight’s gone.

Each passers-by thinks they’re the one.

Here is more about the Girl With The Pearl Earring painting and about Johannes Vermeer. 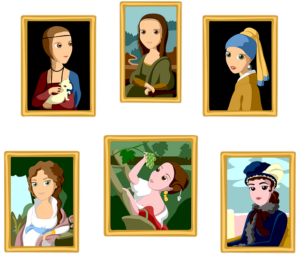 WHY THIS PAINTING IS SO MYSTERIOUS

This painting is so mysterious because the girl leaves more questions than answers. It’s not clear if she is looking at the viewer or turning away from them. It’s also not clear if the girl is happy or sad. What will happen to her? What has happened in her life after this painting?

THE STORY AND TAKEAWAY OF THE SONG

The song’s story has an unwitting male character who walks by the painting for the first time, and immediately falls in love with the girl in the painting. This is, of course, what happens to most people when they first see that painting. But the surprise of the song comes about one minute into the song when after the first verse and chorus, on the second verse, a female vocalist comes in and sings the part of the girl with the pearl earring. This song is a male and female duet with the female singer representing the thoughts of the Girl With A Pearl Earring.

For a while, it feels like there will be a romance between the male character in the song and the girl in the painting, but the guy realizes that he is in love with a dream and an angel that doesn’t exist in real life. He has to come back to reality. There is an interesting lyrics towards the end of the song “Can’t be in love and sane at the same time.” So he had to move on.

But ever ironic, right after the male character in the song realizes that his love for her can never be, the song ends with a whole male chorus professing their love to her using the same lines used in the earlier choruses when they were sung by the original male protagonist. That highlights how many people have and will fall in love with this girl over time.

The song will be featured live for the first time on Monday, September 26th at New York’s popular show InspiredVoiceNYC. The venue is The Parkside Lounge, located at 317 East Houston st.